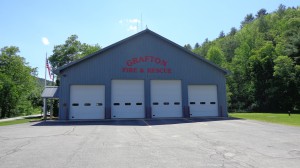 Information updates may be found at the Grafton Fire and Rescue page on Facebook.

History: In 1847 there were newspaper accounts of informal firefighting efforts in Grafton, but it wasn’t until 1923 that the Grafton Fire Department was officially organized. The following year a garage on Kidder Hill Road was acquired to house the hand-drawn, hand-operated pump and a hand-drawn chemical pressure tank, both of which are now on display at the Grafton Historical Society Museum. The first motorized vehicle was put into service in 1933 when a 1926 Cadillac touring car was converted for use as a fire truck. In 1938 the old school house on Main Street was converted into a firehouse and remained in use until 1992 when the present firehouse at 711 Rt. 121 East was constructed.

Equipment: At the present time the Fire Department has a 1999 Freightliner FL80 American Lafrance, 4-wheel drive engine with a Hale 1-stage 1,250 gpm pump, 1,250 gallon water tank, and 2,100 feet of hose and is designated as 58 Engine One. The Department also has a ladder truck designated as 58 Ladder One which is a 2002 Freightliner FL80 American Lafrance with a Waterous 2-stage 1,500 gpm pump, 400 gallon water tank, 75 aerial ladder, and 2,100 feet of hose. The Department has an enclosed Technical Rescue trailer to store and transport specialized equipment used for water/ice rescue, low-rope rescue, backwoods search, and large animal rescue. A Polaris ATV owned by Grafton Rescue is also available for use by the Department for off-road search/rescue, wildland firefighting, and other purposes.

Membership and Organization:  Members of the Fire Department are all volunteers receiving no financial compensation for their hours of training and service to the community. There are approximately 16 active members presently and new members are welcome to join at any time. The members are organized into a fire company headed by a Chief, Assistant Chief, Captain, and two Lieutenants. The Fire Department is under the authority of the Grafton Firefighters Association whose executive committee is composed of people from the community as well as the fire company officers. Support for Department activities is also provided by the Fire Department Auxiliary which is made up of members of the community.

Information updates may be found at the Grafton Fire and Rescue page on Facebook.

Overview: The Grafton Rescue Squad is a volunteer first response Emergency Medical Service (EMS) which responds to trauma and medical emergencies as part of the 911 system. Our primary mission is to provide emergency care, stabilization of patients, and preparation of them for transport by ambulance or medevac helicopter to an appropriate hospital. This care may include airway management, control of bleeding, CPR, defibrillation (AED), insertion of IV lines, oxygen therapy, splinting, back boarding, and assessment of vital signs including an electrocardiogram (ECG). The Rescue Squad is also responsible, in conjunction with the Fire Department, for rescue and extrication of persons from motor vehicle, snowmobile, industrial, farming, or logging accidents as well as wilderness search and rescue, swift and coldwater rescue, ski and mountain bike accidents, and large animal rescue. As a first response unit Grafton Rescue does not transport patients itself. The Town contracts an ambulance company, currently Golden Cross Ambulance, to provide this service.

History and Equipment:  The organization was founded in 1981 as the First Aid Stabilization Team or FAST Squad but with the increased sophistication of its training, equipment, and functions over the years the Squad changed its name in 2009 to the Grafton Rescue Squad as a clearer way to identify its role for the general public. Squad members responded to calls solely in their personal vehicles until 1986 when a used ambulance was acquired. This vehicle was in service until a new purpose-built 2008 Ford F550 Diesel  4-wheel drive rescue vehicle was put into service. A Polaris Ranger ATV equipped to carry a patient on a backboard has also been acquired for use in off-road rescue. Initially housed in a shed attached to the Highway Department Garage, the Rescue Squad has been located at the Fire House since it was built in 1992. Highly regarded for its reliability and quality of care the Squad was named the Vermont First Responder Service of the Year in 2009.

Membership and Organization: Rescue Squad members are all volunteers who receive no financial compensation for their service to the community. The membership is composed of those certified to provide patient care and others who provide operational support. Officers are elected annually. There are currently 12 active members and new members are welcome to join at any time.

Funding: The Grafton Rescue Squad is an independent tax exempt organization licensed by the State to provide First Response Emergency Medical Services to the Town of Grafton. It is only 40% funded by public funds at Town Meeting so that it must generate a significant portion of its operating budget through other means, primarily direct donations, grants, and an annual appeal.

911-Mutual Aid:  The Grafton Rescue Squad is dispatched through the 911 system and is part of the regional mutual aid district for SE Vermont and SW New Hampshire. As such, the Rescue Squad is occasionally called to assist in nearby towns or EMS providers may be called upon to assist here. People are reminded not to call Rescue Squad members at their homes but to call 911 so that there is no delay in receiving needed assistance.